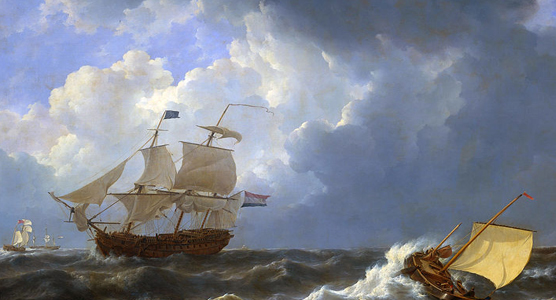 2016: Publication Erik Muller – The transportation of passengers to the Dutch East Indies

A publication by NHF researcher Erik Muller about the development of the transportation of passengers to the Dutch East Indies in the first half of the nineteenth century. In the decades after the abolishment of the Dutch East Indian Company, the shipping links between the Netherlands and its colonies in the East deteriorated. The Netherlands obtained the Dutch East Indies colony by force in 1811 but was occupied by the French and Great-Britain during this time. Because of this, only a few Dutch ships could enter the port of Batavia while being occupied. From 1816 onwards the situation could improve after the possession of the colony was officially transferred back to the Netherlands. The establishment of the ‘Nederlandse Handel-Maatschappij’ (Dutch Trading Company) by King William I in 1824 made it possible for the Dutch shipbuilding sector to grow and shipping to the colonies in the East could get going again. This research-publication focuses on the effects of these developments on the transportation of passengers to the colony during this period. PDF